Back in September 2021 there was a little show released which transfixed viewers - Netflix's North Korean MEGA HIT 'Squid Game'.

It was a show that quickly took the world by storm, becoming the global streamer's No.1 show of all time and embedding itself in modern day culture.

Since it's original air date there have been live Squid Games across the world, created to encapsulate the 'experience' of the show - all of course without that one negative detail / ending for most players.

"...the whole experience was awesome" Players were invited to apply for the mysterious tournament and if chose, would later be recruited to take part in the five tricky rounds of the games.
Given a location only, everything that followed would be a secret, with players left in the dark as to what comes next when they head to their destination...

The location players needed to head to - Blackpool Train Station. Once they arrived, contestants were greeted by Squid Game bodyguards, each wearing the highly recognisable pink body suits and masks (featuring the trademark circle, triangle or square).
Escorted from the train station on to a blacked out double decker bus, players had no idea where they would be heading too...but for the purpose of telling this story, we think it's safe to now say...Blackpool Winter Gardens would be hosting Squid Game. The team behind the immersive experience were recreating challenges inspired from the show, including 'Red Light, Green Light', the 'Honeycomb Challenge' (with another devilish twist) and Tug of War.

Adding some fun to the games, The Fun Experts were contacted by the organisers for inspiration with some additional challenges. Enter the Inflatable Assault Course and the challenging Wipeout.

These inflatable activities added more entertainment to the experience and proved a challenging round for contestants to take part in.

Thankfully the dark turns that the show took weren't replicated here, where there was no chance of injury for players (let alone the outcome the show's contestants faced). Instead, for those who failed a game, they would receive a more 'colourful' punishment.
Entering a separate storage are within the venue, players were showered in colourful, powdered paint, to show that they had failed a challenge.

Participants were taking part in the hope of winning a £500 cash prize following the experience, so there was a lot to play for as with the original show.

"From start to finish it was great, such a fun experience!!" 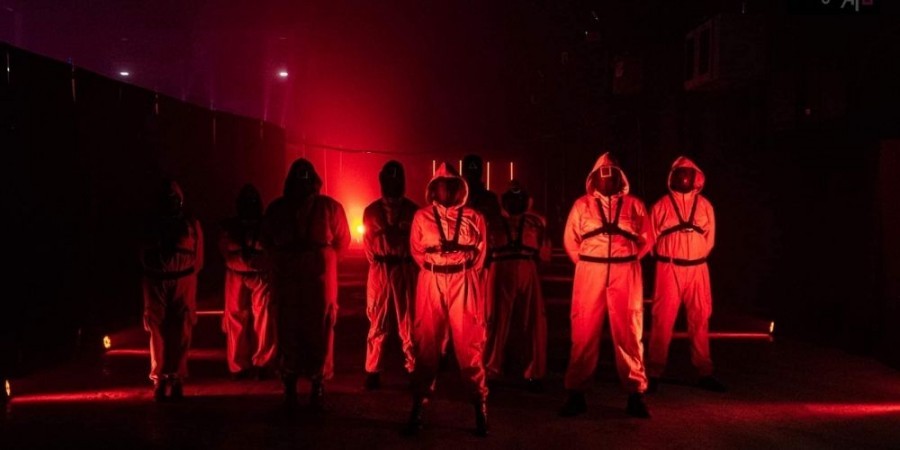 As an immersive experience, Squid Game Live tapped in to the energy of the original show, all the while providing a fun and memorable event for those taking part.

If you're planning an event that taps into a certain theme or looking for some inspiration with your event ideas, speak to The Fun Experts directly and let's start planning!

Posted By Ryan Lee | Posted on: 24-01-2022
Like Tweet Share
Previous Post:
Your Experts in Fun - for events, for the workplace and more!
Next Post:
How have exhibitions changed in 2022?
View Popular Posts
6 Point Checklist: Planning A Successful Fun Day How To Throw The Ultimate James Bond Party 10 Unique Event Venues in Manchester 5 ways Virtual Reality can change the world! 7 Team Building Exercises in London
Need Help?
Speak To A Fun Expert
‭0800 086 2380‬
Having Fun With All Our Clients Since 2003